The Noble Rot white sweet wine of the Bodega Finca San Blas has obtained the “Platinum Best in Show” prize in the World Wine Awards, which is organised by the prestigious British magazine Decanter each year. The Decanter World Wine Awards is well known and respected in the wine sector, thanks to the seriousness and professionalism of its judgements. That is because their jury, 244 people, is formed by Masters of Wine (only 343 people in the world  own this title), Master Sommeliers and other regional experts. In the 2016 edition they tasted blind more than 16000 wines from around the world. The organization also gave prizes to two more wines from our Bodega, both of them red wines.

“The Noble Rot sweet white wine is a rarity that can only be obtained every 7 or 8 years. The arrival of autumn in the Finca San Blas, with fresh nights and plentiful dew, covers the plots that are closer to the riverbed with a blanket of fog each morning. This blanket favours the development of Botrytis, the microorganism which produces noble rot. In this way, scents and flavours are concentrated in  the grapes, with the help of morning fogs, the evening sun and the development of the fungus over the fruit. The rot doesn’t appear in all the grapes at the same time, so as a consequence the grape harvest must be done in several stages. The grapes were manually harvested in small boxes in November 2013, and the wine aged in new barrels of french oak for 24 months. Finca San Blas white wine has complex scents of quince, saffron, honey and fennel, with hints of smoke. Its flavour is fresh, sweet and deep, creating a long, organised and perfect balance. Only a few fortunate people will be able to taste one of the 800 bottles of this ultra-limited production.

In the last few weeks, after receiving recognition from the  Brussels World Wine contest and the El País annual report (with more than 90 points for our white sweet wine and other wines such as our reds Labor del Almadeque, Finca San Blas Bobal, Las Hormas and the white Conveniencia) the Finca San Blas Bodega finds itself on the podium with the great winemakers.” 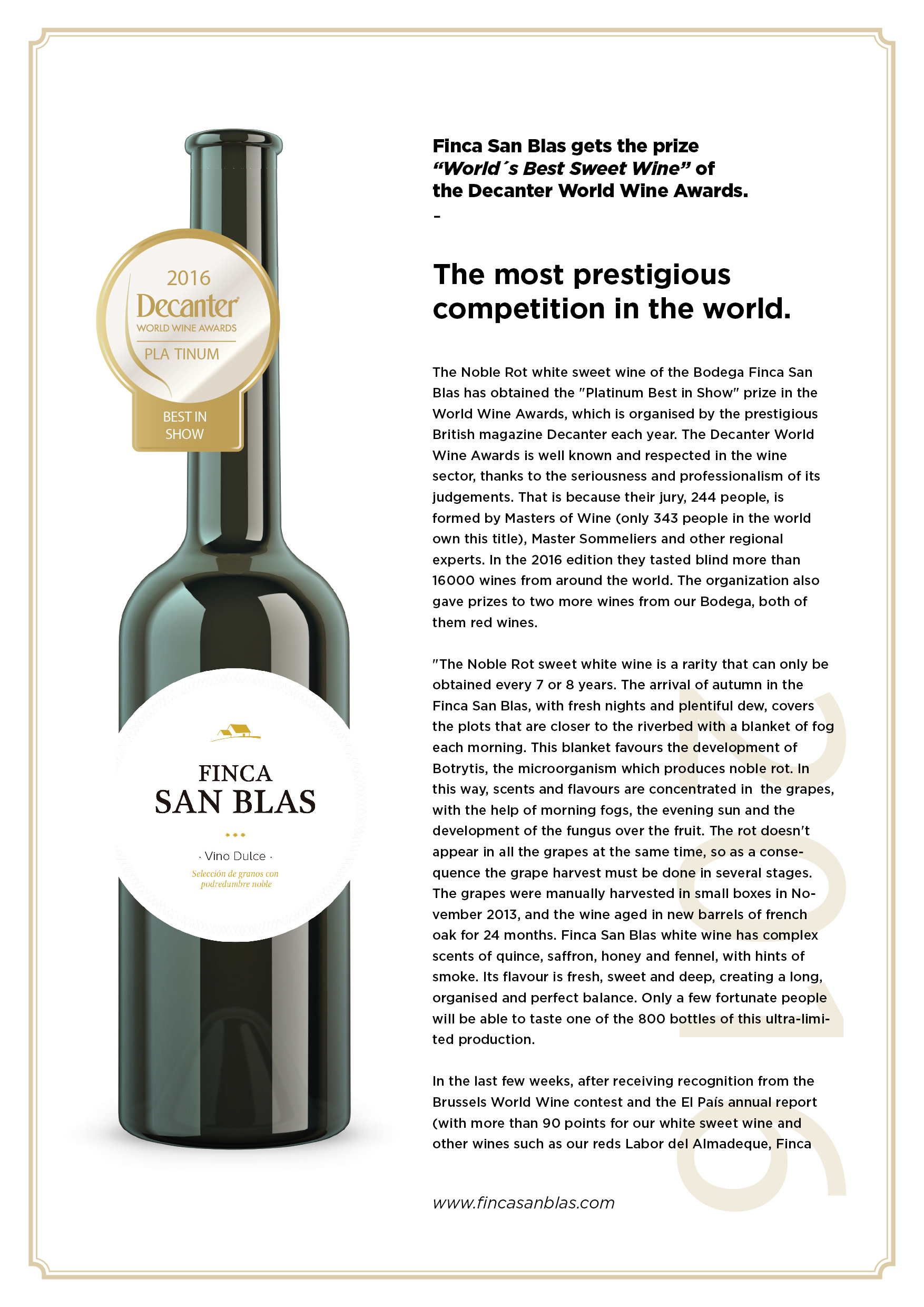